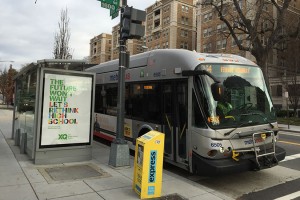 The District Department of Transportation (DDOT) is scheduled to share the latest news in its plan to improve public transit on 16th Street NW.

According to a press release, the meeting will update locals on the project, “including the start of the design phase and proposed transit service changes.” Residents will also have the chance to weigh in on the department’s plan “to improve transit performance and reliability” along the corridor.

As we reported earlier this year, a future when buses could easily cruise down 16th Street NW during rush hour is still likely years away.

Work to bring dedicated bus lanes to 16th Street NW and eliminate some of the corridor’s bus stops might not wrap up until 2020 or later, the District Department of Transportation said in a report earlier this year.