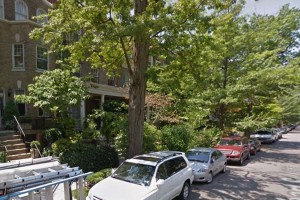 Two thieves armed with a rock whacked a woman in the mouth before stealing her purse in Mount Pleasant yesterday afternoon.

The violent robbery occurred on the 1600 block of Hobart St. NW  just after 3 p.m. yesterday.

A woman was walking along Hobart Street when two people approached her from behind and pushed her down, according to a police report. One of the assailants hit the woman in the mouth with a rock while the other swiped her purse, which contained a Macbook, an iPhone and several credit cards.

The thieves then ran off and were last seen heading east on the 1400 block of  Irving Street. Authorities sent out an alert for the robbers shortly after the crime occurred:

The woman sustained a cut to her lip and bruises on one of her arms but refused medical attention, police said.

A PoPville post appeared to show the aftermath of the crime.