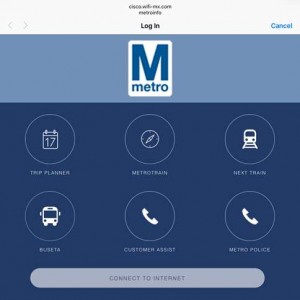 For the next 45 days, commuters can log on for free while waiting for their trains.

“We are listening to our customers’ ideas about ways to improve their experience riding Metro,” Metro General Manager Wiedefeld said in a press release. “Having free access to Wi-Fi while on the platforms at Metrorail stations will allow customers to stay better connected while they travel.”

The test launch will also include a way to access Metro’s “Where’s My Train?” feature. Users will be able to launch the function from the landing page (pictured above) and tap train icons and stations for arrival times.

After the trial period ends, the service will be suspended and officials will evaluate how the program went. If all goes well, Metro could launch free Wi-Fi at all 91 of its stations at a later date.

Read more about the launch in Metro’s press release:

The service, part of the General Manager’s Customer Accountability Report (CARe) initiatives, will be available for 45 days.  After that time, the service will be suspended while the pilot program is evaluated.

“We are listening to our customers’ ideas about ways to improve their experience riding Metro,” Wiedefeld said.  “Having free access to Wi-Fi while on the platforms at Metrorail stations will allow customers to stay better connected while they travel.  We are excited to launch the pilot and hear from our customers about their experience.”

Users will be directed first to a customized landing page that can connect customers to Metro’s Trip Planner, Next Train, and Customer Assistance features. From there, users also may access other websites on the free Wi-Fi.  Similar to other public Wi-Fi, the level of service will vary based on how many people are signed into the service. Users will be responsible for data security, which will be explained in the terms of use notice that must be accepted before receiving access.

As part of the Wi-Fi pilot, customers will also be able to test the new “Where’s My Train?” feature. From the landing page, the Metro Train icon will take customers to an interactive map with real time train information.  Users can tap on the train icon for additional details or click on a station to get train prediction times.

Metro customers are encouraged to submit their feedback at the bottom of the home page.  The information will be used to assess the pilot with the objective of deploying Wi-Fi at all 91 Metrorail stations in the future.