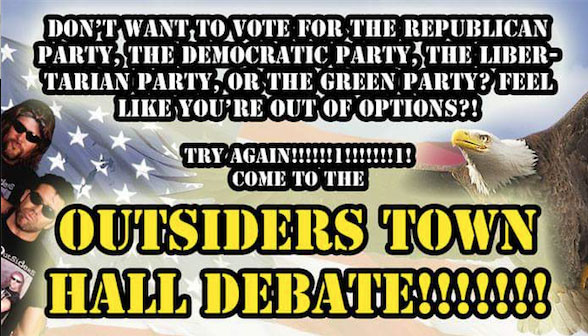 Presidential candidates dedicated to getting a D.C. comedian into the White House, using cantaloupes to solve the nation’s problems and advancing other fringe issues are set to debate in Columbia Heights tonight, for laughs.

Comedians representing the Cantaloupe and Steven Chen parties, among other lesser-known political groups, are scheduled to hold a free “Outsiders Town Hall” at The Wonderland Ballroom (1101 Kenyon St. NW) at 8 p.m.

Ahmed Vallejos, who is producing and moderating the debate for comedy group Laugh Owens Laugh, told Borderstan in an email that the candidates will take questions from him and audience members.

Vallejos said the show is a way to “remember that this election is a sh-tshow by having a fun little sh-tshow of our own.”

“I wanted this fake, comedy town hall debate because we have two presidential candidates with the lowest approval numbers ever,” he said. “It’s clear that the country as a whole don’t trust either major candidate, nor do they trust the Libertarian and Green party candidates. I figured that’s the perfect recipe for a fun show.”