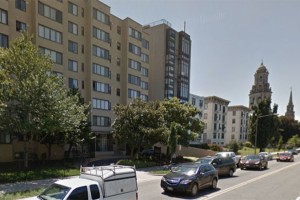 The armed robbery occurred on the 3000 block of 16th Street NW about 12:30 a.m. Wednesday. The area is about a block west of the DC USA retail development.

The victim was in the elevator when two men approached him, according to authorities. One of the men then held a knife to the victim’s neck as his partner grabbed the victim’s wallet and cellphone from his pockets.

A man also hit another man and stole his backpack after trying to rob the relative of the victim in a downtown fast food restaurant this morning, according to authorities.

The robbery happened near 13th and L streets NW after the thief fled from the McDonald’s at 1235 New York Ave. NW, where he tried to steal a cellphone about 4:30 a.m.

The robber was in the eatery’s restroom when he shoved a customer into the wall in an attempt to get the man’s phone, police said. The thief eventually left the restaurant, and police were called to the scene.

On his way home with a relative, the customer encountered the robber again about a block north of Franklin Square. This time, the thief hit the man’s relative in his face and took his backpack.

Police have arrested 29-year-old Adrian Johnson of Upper Marlboro, Md., in connection with the crime, according to authorities. Information on his lawyer wasn’t immediately available.