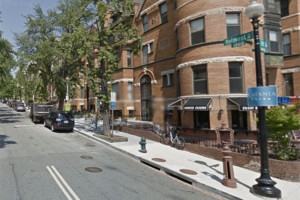 Adams Morgan community leaders last night urged District transportation officials to consider whether two residential roads in the heart of the neighborhood could transform into one-way streets or benefit from other changes in the area to ease traffic congestion.

Advisory Neighborhood Commission 1C unanimously approved a resolution that asks the District Department of Transportation to study the effects of ending two-way car travel or making other alterations to traffic on or near the 1800 blocks of Belmont and Kalorama roads NW.

The streets have “significant traffic volume, cut-through traffic, traffic noise, traffic accidents and dangerous conditions for pedestrians and cyclists,” according to the resolution. Drivers often side-swipe cars parked on the roads and “honk and engage in verbal and/or physical confrontations in their attempt to proceed through the blocks, disturbing residents at all hours of the night and early morning hours,” the measure notes.

DDOT will “hopefully lessen the impact of all this street traffic on these two, very narrow residential streets,” ANC 1C chairman Ted Guthrie said during the commission’s meeting yesterday.

Donald Brooks, who has lived on the 1800 block Belmont Road since 1992, said at the gathering that making his street a one-way road could help combat a “constant problem” with traffic there.

“I strongly encourage the study to take place,” he said.

But not everyone at the meeting was enthused about new one-way streets.

Denis James, who has lived on the 1800 block of Kalorama Road since 1971, said he’s afraid that eliminating two-way traffic on his street could make it harder for him and other residents to get around Adams Morgan.

“I don’t think there’s a magic wand” to decrease traffic congestion, said James, who is the president of the Kalorama Citizens Association.

So, should the 1800 blocks of Belmont and Kalorama roads become one-way streets? You can weigh in through the poll and in the comments.