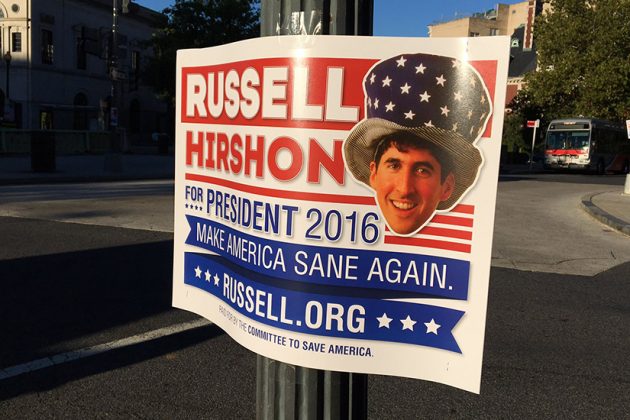 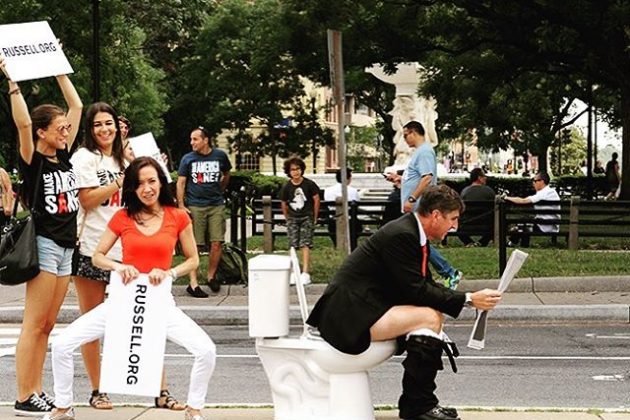 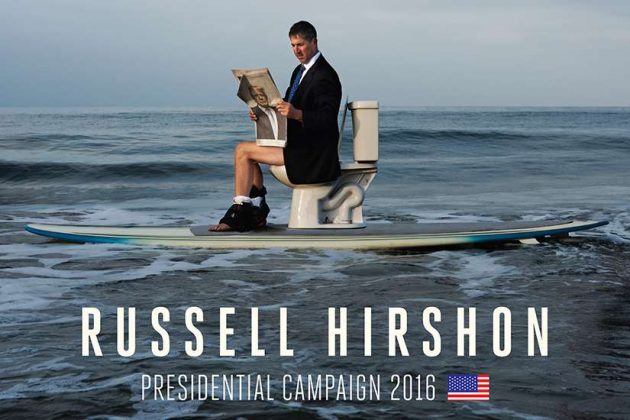 Why? Well, because he doesn’t actually intend to take office (though he really is registered with the Federal Election Commission as an independent candidate).

“Honestly, you’re looking at the signs and you have to wonder, what in God’s name?” Hirshon said. “What would motivate someone to do that?”

The 55-year-old president of a small local creative agency is making a silly statement about the entire process. As he puts it in a press release, Hirshon “engages the public through his performance-art-politics that look to awaken individuals to his message and bring attention to the cause of supporting charitable organizations over political campaigns.”

More plainly, he posts funny signs across the city and occasionally sits on toilets in public in an attempt to get people to donate to charity instead of political candidates.

“For me, it’s like an art piece. I’m creating a canvas of political art,” Hirshon said. “The outcome of course… is to do that function of donating to charitable causes.”

Instead of filling the war chests of Donald Trump or Hillary Clinton, Hirshon said people should open their wallets to charities like The Mastocytosis Society, LUNGevity and The Many Hats Institute. But any charity will do, as long as it helps people, he said.

“If I can raise money for the charities that might help my friends, if it benefits other people’s charities, then it’s a win,” he added.

This isn’t the first time he’s tried to poke holes in the political process. In 1990, during the height of Marion Barry’s drug scandal, Hirshon made a name for himself by running for mayor of the District.

Two years later, he launched a sarcastic presidential campaign centered around grungy cable TV ads peppered with slogans like, “if you don’t vote, I just might win.”

“I’d put my phone number on there and people would call,” he recalled. “Talk about the greatest political science experiment ever.”

Though something like that would likely turn him into a viral video star these days, Hirshon said his exploits and celebrity have mostly been lost to time. When he relaunched his presidential campaign earlier this year, few people remembered him. In fact, it was only when he started putting up signs across town last week that he started to get noticed.

Last weekend, 300 people visited his website, about as many visitors as the previous six months put together; still a small number, but a definite sign of life. And even if his relaunched campaign snags just couple more dollars for charity, Hirshon said he’s happy with that.

“There will be those that say I’m an idiot or crazy or who knows,” he said. “But if I raise ten dollars extra more for charities, then I’m good with it.”