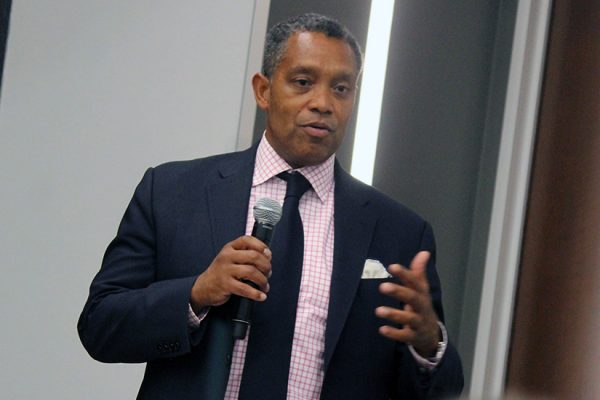 Speaking during a meeting of Dupont Circle’s advisory neighborhood commission, Racine challenged Lanier’s assessment that failures at local and federal agencies allowed the same criminals to commit violent crimes over and over again.

“I completely disagree with Chief Lanier’s characterization that the criminal justice system is broken beyond repair,” he said.

Though Racine acknowledged that the District doesn’t have authority over many agencies that play a role in catching criminals — like the Court Services and Offender Supervision Agency, which supervises people on probation and parole — he questioned whether that lack of authority actually imperiled criminal justice in D.C.

“The reality is that those agencies actually do a pretty good job,” Racine said.

The attorney general pointed to the District’s low rate of recidivism, or someone becoming a repeat offender, as proof of those agencies’ effectiveness.

“Do you know how many people on a given day in the District of Columbia are on probation or parole? 11,000, 1 in 64,” Racine said. “Do you know what the rate of recidivism is during the time of supervision by CSOSA? One percent.”

Racine continued: “So when people say the system is broken beyond repair, they kind of don’t tell you what the agencies do.”

And although the attorney general said he shared many of Lanier’s “frustrations” over repeat offenders, he also questioned whether the criminal justice system was at fault.

“Whose responsibility is it when you’ve got an individual who was on probation or parole, did their time on probation or parole without being rearrested, and sometime thereafter, [they] commit a crime?” Racine asked. “Is that the criminal justice system? It certainly can’t be the fault of CSOSA. I think there’s a lot of other players that need to come in.”

For instance, Racine said the District needed to do more in the way of rehabilitating criminals, not just catching them and locking them up.

“You need to have the District of Columbia … intensely provide the kind of case management, services, mental health, housing, drug abuse, job training, to allow these folks to have an opportunity to move in a direction that’s not merely criminal,” Racine said.

“Could it be improved? Damn right it can be improved, in so many ways,” he added. “It’s up to you and up to your elected attorney general to … try to improve it.”