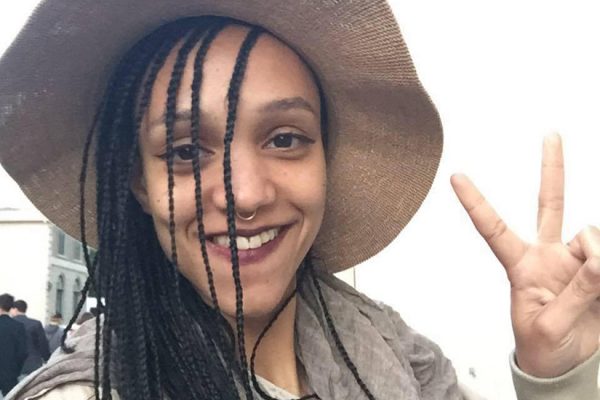 I was looking forward to meeting Brittany Carney after seeing her great, relatable energy at open mics across town.

She and I finally caught up recently and she shared with me a little of what goes on when comics get off stage and teased some of her upcoming endeavors.

Borderstan: Can you tell me about the sense of community around the local comedy scene?

Brittany Carney: Fridays and Saturdays are turning into this fun community atmosphere, but I feel like what ends up happening is that it’s just a bender of chaos and comedy.

I love that. I think that I’ve been able to pick up on it from going to shows, but I feel like there is a large sense of community among you guys that is really cool to see.

I’m really tickled to know that maybe people pick up on that just because it’s been – especially over the past year and the summer, for some reason, I’ve felt like that’s just default where I am all weekend and it’s so fun to bond with everyone. And so many people come to shows and say hi. I will if I’m not on a show; I’m happy to come by and say hi. So, it just feels like I’m bro-ing out with my bro comic friends.

So, do you tend to visit shows even when you’re not necessarily performing?

I was thinking about that because some comedy friends can’t stand it. Like, it’s hard to be at a comedy show and not go up and I definitely relate to that. I probably feel that more now. I think at the beginning, when I was very new, I was really quiet and sort of avoided talking to everybody.

Yeah, maybe it can be an intimidating crowd because if everybody knows each other and they’re all super tight, maybe it feels like it’s hard to get in.

It’s hard to get in. Everybody is riffing often and I’m generally kind of shy. Now, I feel really comfortable and feel like I’m close friends with many, but I think in the beginning, I was very content with just going to shows and maybe just trying to hang out and saying hey.

I still enjoy hanging out on a Saturday even if I’m not on the show just ’cause it’s fun to catch up with everybody. I definitely relate to the idea of “FOMO,” in that yeah, certainly I wish I was getting on stage. But, also to be honest, I realize I feel that I’m missing out on some fun adventures if I’m out of town or if I’m doing something else with other friends. I like hearing the stories about what’s happening over the weekend.

Oh yeah, I feel like it was really emotionally intense for me. So you might know comic Jessy Morner-Ritt? Friday was her last show before she moved to New York. It was really fun. We wore matching outfits and she asked if I could sit on the stage with her during her set. It ended up being a long night, everybody was hanging out, but it felt very community-oriented.

What I appreciate about her and friends on the scene is that you can be totally silly together and also dive into conversations that have more substance and are more emotionally in tune, so you learn a little about them. Saturday was also really exciting for me because I’m going to start hosting the late show at 11:30 [at The Big Hunt] every other Saturday and so last night was my first time doing that. That was fun. It was kind of a lighter crowd. I’m excited about the growing process; I think it’ll force me to be more comfortable engaging the audience.

Yeah, how do you feel about that now?

I think it’s important for me to go into this knowing that my set up front won’t be that strong, in my opinion. Because often, you go in totally cold, even going first sometimes, or second. With certain personalities, I think it’s tough to get everybody on board, so the reason this opportunity means so much to me is that I think I have this awkward energy and I know that sometimes, that’s just what helps shape my comedy, but I think in terms of a hosting personality where you’re supposed to be generally likable and warm.

I told myself that I probably wasn’t going to have an amazing set and I didn’t, but it was still fun. I think I started off cold and ended strong. What I look forward to is finding my own way of engaging the audience in a way that’s comfortable for me, and also believable and authentic and most importantly, funny.

That’s awesome. So you’ll be doing that every other Saturday at the Big Hunt?

Do you have other shows that you’re working on?

Yeah, so one thing I’m excited about now is Fale University, which is what I’m doing with Naomi Karavani and Pearl [Rose Hood]. That’s been a really fun project. We’ve so far had two shows and the upcoming one is on Sept. 24.

The first show was about Art History. So, the idea is that it’s a mock academic symposium. Five comics do a lecture about any topic related to the theme and the idea is just to be funny and you can be as bawdy or absurd as possible. Last month’s was Biology and this coming month’s is American History. I’m excited about this next one. Pearl and I are hosting and Naomi will do her lecture. My background is in American History, so I’m really excited about it.

Information on Brittany’s upcoming Fale University show can be found on Facebook. You can also see her every other Saturday hosting the 11:30pm open mic at the Big Hunt. She’s also on Twitter @MarvinGaelic.