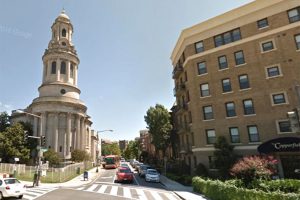 A thief in Columbia Heights learned over the weekend that a gun isn’t necessarily enough to rob somebody who is unable to hear.

The gun-wielding robber had to use his cellphone to type a note with his demands when he encountered a deaf man on the 1500 block of Columbia Road NW about 1:30 a.m. Saturday, police said.

“Give me your bank [card] and money and your pin number,” the message said, according to authorities.

After reading the note, the victim handed over $20 and his debit card with its personal identification number. The thief then knocked the victim down and fled toward Adams Morgan.

A man also exposed himself to a woman and groped her in Dupont Circle this past weekend, according to authorities.

The incident happened on the 1700 block of 21st Street NW about 9 p.m. Saturday.

The victim was walking about a block north of the Phillips Collection when a man approached her while exposing himself, police said. He then fondled her and headed toward R Street NW.

Authorities described the suspect as:

According to police, other crime in the Borderstan coverage area since Friday included a shooting, a stabbing and: