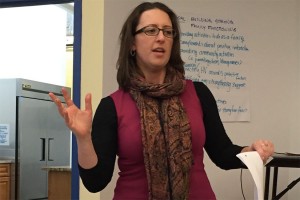 Councilmember Brianne Nadeau of Ward 1 is set to discuss the District’s marijuana laws over half-price chicken wings at a bar near the U Street corridor tomorrow night.

Nadeau is slated to speak at Duffy’s (2106 Vermont Ave. NW) about the cannabis statutes as well as her support for private pot clubs and her views on other D.C. issues, according to a Meetup event post.

The councilmember sits on the Marijuana Private Club Task Force, which the D.C. Council created earlier this year to study the possibility of licensing places where people can legally consume weed. The panel currently is working on a report with recommendations.

Although growing and using cannabis on private property is legal in the District under D.C. law, federal law still prohibits pot possession and consumption.

Tom Fazzini, a spokesman for Nadeau, said the councilmember will highlight how the District’s conflict with the federal government over marijuana policy is one reason why the push for D.C. statehood is important.

“Congress has made it clear it doesn’t respect the will of D.C. voters when it comes to cannabis,” Fazzini said in an email.

Seating for the discussion is limited, according to an email from Duffy’s. Locals interested in attending it are encouraged to RSVP online.

The talk is scheduled to begin at 7 p.m. Wednesday. But Duffy’s half-off wing special runs all night.