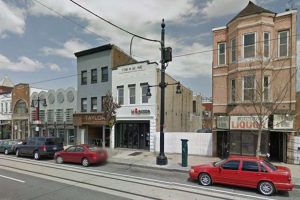 A masked man with a gun robbed a fast casual pizza restaurant on H Street late last night, according to D.C. Police.

The armed robbery happened inside of the &pizza eatery at 1118 H St. NE just before 11 p.m. yesterday.

A man wearing a mask entered the pizzeria through the front door, walked up to a cashier and pressed a handgun to her side, according to a police report. The man then told the cashier to “pop that drawer” and she complied by opening the register. The armed robber grabbed about $300 in cash and left through the pizza restaurant’s back door.

A witness was able to flag down a police officer on patrol near the intersection of 12th and H streets NE some time after the crime occurred.

This isn’t the first time someone robbed the &pizza on H Street at gunpoint. A robber also used a gun to hold up the fast casual restaurant earlier this year in January.