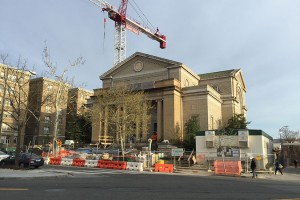 Ward 1 D.C. Councilmember Brianne Nadeau has a message for the developer of a forthcoming hotel in Adams Morgan: Honor the deal you struck with the city by hiring more District residents or forfeit your agreed-upon tax abatement.

As reported by the Washington Post, developer Sydell Group struck a bargain to redevelop a vacant Adams Morgan church and the building next to it into a hotel called “The Line.” As outlined in the deal, Sydell agreed to hire hundreds of local workers for $46 million in tax abatement.

But as the hotel nears its completion date, the developer reportedly has only hired 25 percent of the 342 workers it originally promised to employ.

Though the hotel told the Post it intends to “meet and likely exceed the obligation” required for its abatement, some are wondering whether it actually will. In response, the District has threatened to “bring our full enforcement to bear” if the deal falls through.

What could happen if Sydell doesn’t meet that goal? Nadeau shared her views in an email to the Adams Morgan listserv this morning.

“The Mayor’s team has reported to me that the hotel is not currently on track to meet the 342 employee local hiring requirement placed into the tax abatement legislation,” Nadeau wrote. “If the developer does not meet the requirements, I will be prepared to recommend to the District CFO that he revoke the tax abatement.”

Nadeau added: “I am putting together a list of community partners, including organizations, schools, individuals and businesses that the hotel developer should be working with on recruitment not only for the permanent jobs, but also the remaining construction jobs.”

I wanted to take a moment to update you, in my own words, on hiring at the Adams Morgan Hotel project, also known as the Line Hotel, and my efforts to hold the developer accountable for job hiring requirements.

Many of you were involved in the robust community effort to ensure hiring of local residents during the construction of this project, as well as the creation of permanent jobs for our D.C. and Ward 1 residents. I want to commend the members of the ANC at that time as well as the former Councilmember for coming together to draft a strong piece of legislation, actually putting into law many of the things the community wanted to see happen in this project.

Although much of that work was completed before I became Councilmember, it was clear to me even before I took office that I would need to devote significant time and energy to ensuring that community vision was fulfilled.

Not too long into my tenure in 2015 I began hearing concerns from community members about this project. I spent time working with residents, business owners, and various government agencies to address each concern, but there are some that have persisted.
In particular, despite my own efforts and that of present and former ANCs and executive agencies, the Mayor’s team has reported to me that the hotel is not currently on track to meet the 342 employee local hiring requirement placed into the tax abatement legislation. To reiterate – the hotel is required, by legislation, to hire 342 D.C. residents for construction jobs in order to receive its tax abatement. There are additional hiring requirements for permanent jobs that will be available next year when the hotel opens.

Here’s what you need to know:

I want to thank in particular former ANC Bryan Weaver and current ANC Wilson Reynolds for so diligently pursuing the full implementation of the law. When the law was drafted, it created one of the most aggressive set of requirements we had ever placed on a tax abatement. That was in large part because of the strong community effort to do so. It has definitely been a learning curve for all involved, but it has also been very collaborative, from the community, to ANC, to Council, to Mayor’s team.

I also wanted to let everyone know that I am putting together a list of community partners, including organizations, schools, individuals and businesses that the hotel developer should be working with on recruitment not only for the permanent jobs, but also the remaining construction jobs. Commissioner Reynolds is working with me and the developer to put together a hiring fair at the Festival Center, likely in November, for the jobs that will become available next year. I understand from Mr. Weaver that the Adams Morgan Youth Leadership Academy has an MOU in place as one hiring partner already.
Please feel free to contact me directly at [email protected] with any suggestions for community partners, or to discuss the hotel project more broadly.