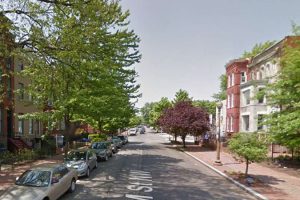 Someone armed with a gun forced a man to hand over his “money, money, money” during a violent robbery in Shaw last night.

The robbery and assault happened on the 400 block of M St. NW just before midnight yesterday evening, according to D.C. Police.

A man was sitting in a gated patio area in front of his home when he was approached by a person with a white gun, according to a police report. The person pointed the gun at the man and said simply, “money, money, money.” When the man offered up his cell phone, the robber knocked it to the ground, punched the man in the face and again repeated, “money, money, money.”

The thief was last seen with two other people heading north on the 1200 block of 5th St. NW.

Police are also looking for seven people connected to a theft and simple assault that occurred at a NoMa convenience store last month.

The theft and assault happened at a store on the 1300 block of 2nd Street NE the evening of Aug. 13, police said.

A video released today shows a group of young men walking into a 7-Eleven and wandering around several shelves. Then, as the young men exit the store, two of them appear to punch an employee while the rest of the group runs away.