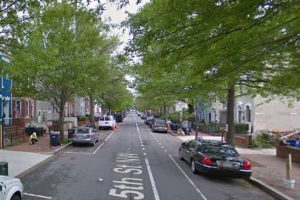 A robber pulled out a gun and yanked a woman’s bag away from her in Shaw yesterday afternoon, according to D.C. Police.

The robbery happened on the 1600 block of 5th St. NW around noon yesterday.

A woman was walking south on 5th Street when someone ran up behind her and pulled out a gun, authorities said. The thief then grabbed the woman’s bag and darted into an alley before she had time to react. The bag contained an iPhone, some cash and several credit cards, among other personal items.

The woman sustained a scratch on her arm during the robbery but declined medical treatment, according to the report.

Police said they’re on the lookout for:

MPD is also seeking someone connected to a shooting that occurred on the 700 block of H Street NE last weekend.

The shooting happened on the 700 block of H Street NE on Sept. 17 at about midnight, according to D.C. Police.

In a video released yesterday, a man in a baseball cap can be seen paying for something at a restaurant. Though the man is connected to the shooting, police called him a “person of interest.”