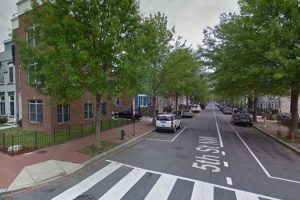 A thief armed with a handgun took a woman’s violin case during a robbery in Shaw yesterday evening, D.C. Police said.

The robbery happened on the 1600 block of 5th Street NW around 10:45 p.m. The crime occurred on the same block where another armed robbery took place Wednesday afternoon.

A woman was walking along 5th Street with another person when she felt someone tug on her purse, according to a police report. The woman then fell to the ground, and when she looked up, she saw someone aiming a silver handgun at her.

“Give it to me, Give it to me,” the robber demanded. The woman then handed over her purse and phone, but the robber wanted her violin case, too, police said. It’s unclear whether the case contained anything.

The robber swiped the violin case and was last spotted running north with another person in an alley on the 500 block of Q St. NW. Authorities found the case lying on the ground about two blocks away.

Police didn’t release a description of the robber.