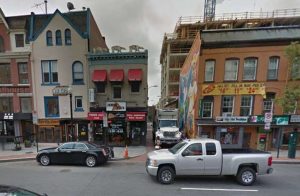 (Updated at 11:43 a.m.) An argument that began inside of a U Street pizzeria early this morning ended in a stabbing and an assault, D.C. Police said.

The stabbing and fight occurred outside of the Jumbo Pizza at 1344 U St. NW just before 4 a.m.

Two people got into an argument over skipping line to order pizza at the restaurant, according to a police report. The two people then took their argument outside, where one of them took a knife out of their backpack and stabbed the other.

The person who was stabbed, a man, retaliated by punching his assailant, knocking him unconscious, police said. One of the victim’s companions then kicked the suspected stabber in the head.

Police arrested the alleged stabber, 20-year-old Jose Nelson Melendez Rodriguez, and the person suspected of kicking him in the head, 20-year-old Justin Anthony McKinney. Information on either of their lawyers wasn’t immediately available.

The victim of the stabbing was taken to the hospital, authorities said.

ABC News reporter Mike Levine tweeted a photo this morning that appears to show the aftermath of the crime:

@DCPoliceDept @PoPville Any idea what happened at 14th & U NW? Sunday morn: Police tape up, pool of blood on sidewalk pic.twitter.com/zKxgLiHHd2

more stories
Previous
What to Expect Around Town This Weekend (Sept. 24-25)
Next
Borderstan Brief