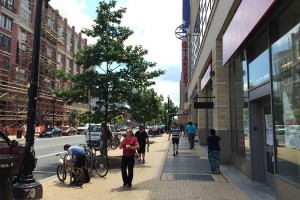 A man sexually assaulted a girl in a Columbia Heights store over the weekend, police said last night.

Authorities didn’t immediately identify the shop on that block. But the area has several businesses, many of which are in the DC USA retail development.

The man trailed the kid into the unnamed store and offered her gum, according to authorities. He then got a hold of the girl and sexually assaulted her.

The suspect might have links to more crimes than just the sexual assault, according to authorities. Police are asking for information from anyone who may have been a victim of the suspect.

Anyone who has information regarding this case or additional cases should call police at 202-727-9099. Additionally, information may be submitted to the TEXT TIP LINE by text messaging 50411. DC Crime Solvers currently offers a reward of up to $1,000 to anyone who provides information that leads to the arrest and indictment of the person or persons responsible for an assault committed in the District of Columbia.