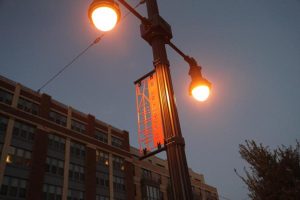 How many D.C. government officials does it take to fix a broken street light? Mayor Bowser and a handful of District employees helped answer that question in Columbia Heights last night.

The mayor visited the neighborhood to launch a week-long project to repair broken street lights in all eight of the city’s wards.

“We have about 70,000 street lights,” Bowser said, pointing to a broken street light at the intersection of 12th and Euclid streets NW. “As you can see, this one should be on, but it’s not on. Across the city, at any given time, we could have scads of these lights out.”

Some locals in Ward 1 have recently written to Borderstan to report street light outages.

“Several of us have contacted DC 311 and also Councilmember Brianne Nadeau, but the street lights are still out,” wrote one reader in August. “This is a critical issue for us — we park our cars there.”

Under the mayor’s new initiative, city employees will repair broken street lights in the areas where locals have most frequently reported them.

More information in a press release from the Mayor’s Office:

Today, Mayor Muriel Bowser announced a week-long effort to identify street light outages in all eight wards of the District and launched Text to DC311. Immediately following the announcement, teams of District Government employees went into neighborhoods across all eight wards where residents have reported the most outages to take an inventory of broken street lights.

“We have 70,000 street lights in the District and too many of them do not work. By fixing street lights, we can make District streets safer, stronger and brighter,” said Mayor Bowser. “By launching Text to DC311, we are offering residents a more convenient way to report outages, as well as other issues. We know that everyone’s time is valuable, and we are doing everything we can to bring city services to your fingertips.”

Last year, Mayor Bowser introduced her Safer, Stronger DC plan, a comprehensive public safety agenda to combat violent crime in the District of Columbia. The initiative announced today is intended to support this plan. In her announcement, Mayor Bowser highlighted the importance of outdoor lighting in keeping streets safe.

With the launch of Text to DC311, residents now have five ways to report city service issues and make requests to DC311. Residents can continue to report issues online at 311.dc.gov, through the DC311 mobile app, via Twitter, and to live agents at the 311 call center.

Still in the pilot stage, Text to DC311 currently accepts service requests for some of the District’s most popular issues like street light repairs, trash and bulk collection, and parking meter issues. To use Text to DC311, residents simply text DC311 or 3-2-3-1-1 from their mobile phones and type “Menu” or “New” to get started. In response, the system will provide a list of service request options. Residents trying to report an issue that is not on the featured list will be redirected to 311 Online.

In order to support the Mayor’s efforts to identify and fix street light outages, Text to DC311 has made it even easier to report a broken light. To report a broken street light, residents simply text the words “street light” to DC311 (32311). The system then asks a series of follow-up questions in order to get more information about the light. In the future, residents will be able to go online and see a map of reported street light outages and track the District’s progress in fixing the lights.