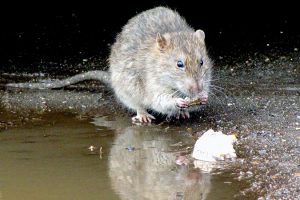 Watch out, rats. The D.C. Department of Health and the National Park Service are gunning for you.

The District and federal agencies plan to launch a citywide offensive against rodents occupying NPS territory this Saturday.

“The National Park Service is committed to ensuring safe, positive experiences for visitors in all of our parks, and this agreement with the D.C. Department of Health provides us better tools to control the rodent population,” NPS National Capital regional director Robert Vogel said in a statement.

The partnership will help ensure parks see rat-abatement crews more often, according to the National Park Service. DOH will come up with recommendations to make parkland less welcoming to the vermin, too.

Locals also now can take part in the battle against rats by calling 311 to report spottings of them on National Park Service land, including the area around the Dupont Circle fountain.

Rats have been on the city’s collective mind as of late, it seems.

Mischievous Yelpers recently managed to rename the Dupont Circle park as the “Dupont Circle Rat Sanctuary” on Apple Maps, according to Washingtonian (or the District’s subreddit, depending on who you ask). On Tuesday, Fox 5 personality Annie Yu called the park’s rat problem a “true health hazard” during a live broadcast.

“I wouldn’t even begin to speculate on what park has the most rats, but suffice to say we have infestations at our parks throughout the city, which prompted us to work with the city on a cooperative solution,” he said. “And to be fair, it’s a problem throughout the city, not just on NPS property.”

What do you think? Should Dupont Circle have the special honor of being D.C.’s “rat sanctuary?” Voice your opinion in our poll below and in the comments.