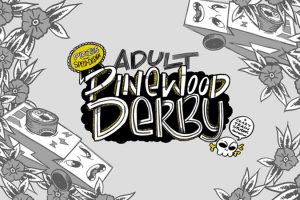 Locals will have a chance to cheer on little wooden cars as they zoom down a sloped track during an event in Truxton Circle this weekend.

If you’re not sure what a pinewood derby is, Crazy Train Studios lays it out like this:

Those familiar with the Boy Scouts of America will understand that the Pinewood Derby was the coolest thing those little nerds ever did. For the uninitiated, the concept is simple–carve a wood block into a custom car shape, paint it, add wheels, then race it against your buds on a giant gravity-powered ramp.

During the race, about 20-30 decorated wooden cars will fly down a long ramp in one-on-one matchups, said event organizer and Crazy Train co-founder Mike O’Brien.

Though judges will award prizes to the three fastest cars, they’ll also hand out awards for the best-looking vehicles. And there will be some interesting designs, including pinewood derby cars made to look like a pink swan and a lightning bolt, O’Brien said.

All who enter a car into the tournament will receive a complimentary swag bag with pins, stickers and other goodies, and Saturday’s derby will also have an emcee, a DJ, beer from Pabst Blue Ribbon and ice cream bars from Milk Cult, O’Brien said.

Though attending as an audience member is free, registering for the race costs $10 per car.