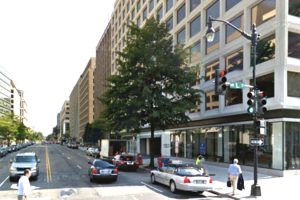 A man with a knife chased a D.C. government employee who gave him a parking ticket downtown yesterday afternoon, police said.

The man got mad when the city worker handed him the ticket, according to authorities. He then pulled out a knife and went after the man, while yelling at him.

At some point, the man with the knife snatched the worker’s cellphone and refused to return it.

Nathan Cortez Johnson, 40, was arrested in connection with the crime yesterday and charged with assault with a dangerous weapon, according to police and court records. Information on his lawyer wasn’t immediately available.