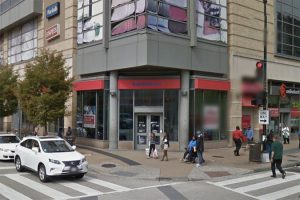 (Updated at 2:55 p.m.) A knife-wielding thief robbed a woman depositing money at a bank in Columbia Heights before it opened yesterday morning, police said.

The victim was in the bank’s lobby with her money when a man came up to her from behind, according to authorities. The man then flashed a knife and told her in Spanish to give him her money.

The woman gave the man $500 soon after and screamed. The man told her not to scream and then walked away.

A thief punched and robbed a man in Adams Morgan overnight, too, according to authorities.

The violent robbery occurred on the 1700 block of Columbia Road NW about 12:15 a.m. today.

The victim was walking near the Adams Morgan Safeway when two people approached him from behind, police said. One of them then punched the victim in the face.

The duo grabbed the victim’s Samsung cellphone soon after and fled.