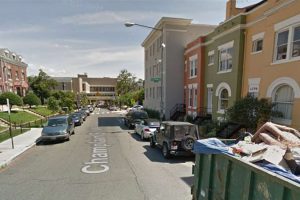 A man fought off a group of burglars after they broke into an Adams Morgan home early yesterday morning.

The violent burglary happened at a residence on the 2300 block of Champlain St. NW around 2:30 a.m. Sunday, according to D.C. Police.

A woman was in the rear of a home when someone rang the doorbell, police said. When the woman opened her front door, she saw a man standing outside. Without warning, the man told her to “get back in the house” and “give me your money” while forcing his way inside.

During the scuffle, three other people emerged from hiding and tried to enter the home, prompting the woman to scream the name of a man who was sleeping in another room, according to police. The woman also hit the “panic” button on her home alarm system as she fought to push the intruders back through the front door.

The man awoke upon hearing the woman’s screams and rushed toward the commotion, police said. One of the burglars then pointed a handgun at the man in an apparent attempt to ward him off. But the weapon didn’t seem to faze the man, who charged the gun-wielding burglar and began to fight with him.

Though the burglar pistol-whipped the man in the head several times during the fight, the intruders eventually ran from the home without stealing anything, authorities said.

Police put out the following alert shortly after the crime occurred: