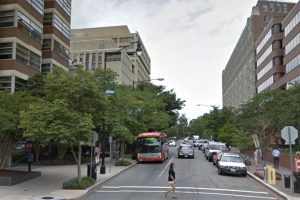 thief put a man in a choke hold while his accomplice repeatedly punched the victim during a robbery in Dupont Circle last night, police said.

The victim was walking about a block south of the Dupont Circle NW traffic circle when two men approached him, according to authorities.

One of the men locked his arm around the victim’s neck soon after. The other man then hit the victim in his face and his stomach, ordering him to hand over his wallet.

The victim eventually flung his wallet out of his pocket and dropped his cellphone. The men took the items and fled.

Police released a tweet with suspect descriptions after the robbery:

But the tweet included lookout information for three men. It wasn’t immediately clear what role the third man may have played in the crime.

A thief also pulled a woman to the ground and robbed her near the U Street corridor last night, police said.

The victim was walking about a block south of U Street NW when two teenage boys came up to her from behind, according to authorities. One of the teens then grabbed the woman around her neck and brought her down.

They ran off with her purse soon after.

Police put out a tweet with suspect descriptions after the crime: