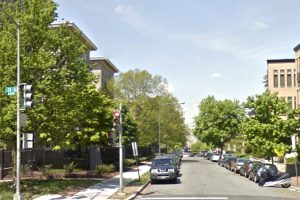 The person with the gun took the victim’s wallet before fleeing with the two other people.

A thief also punched and robbed a man and ripped the shirt of a woman who tried to help the victim in Park View last night, according to authorities.

The violent robbery occurred on the 3400 block of Georgia Avenue NW about 7:45 p.m. Thursday.

The woman and man were walking about three blocks north of Bruce Monroe Community Park when they came into contact with a man, who asked them for change, police said.

The man who was with the woman said he didn’t any money for the man, who then punched him in the neck, knocking him down. The attacker grabbed the man’s wallet and Kindle from his pockets soon after.

During the confrontation, the woman tried to help the man with her and got her shirt torn by the robber.

Police put out a tweet with suspect information after the crime:

more stories
Previous
Man Stabbed ‘Multiple Times’ in Shaw
Next
What to Expect Around Town This Weekend (Oct. 15-16)