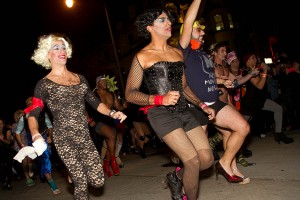 Scores of people are expected to line up along a portion of 17th Street NW tomorrow night to watch runners in high heels and larger-than-life costumes sprint down the block.

Ba’Naka and Birdie LaCage will both serve as grand marshal for this year’s race, just as they did last year. D.C. Mayor Muriel Bowser will also attend the event.

The race will begin at 17th and R streets NW at 9 p.m. During the contest, runners in high heels walk, sprint and stumble toward the finish line at 17th and P streets NW. Crowds usually line up along 17th Street between R and P Street NW hours before the race, so attendees who want to get good photos or see the race up-close should arrive early.

The following streets will be closed between 6:30 and 11 p.m. Tuesday:

Those interested in running in the race can register at Cobalt (1639 R Street NW) any time before it starts. To work as a volunteer during the event, fill out this online form.

The first High Heel Race was organized in 1986 by JR’s Bar and Grill. Since then, it has become one of Dupont Circle’s most popular yearly events and draws thousands of people annually.