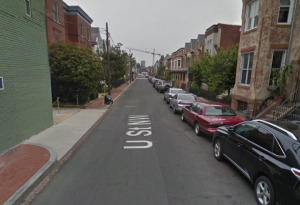 Would-be thieves with a gun ordered a man to give up his bag in LeDroit Park last night, but decided not to take anything, police said.

The attempted armed robbery happened on the 500 block of U Street NW about 7:15 p.m. Monday.

The victim was about to go in his home just south of Howard University Hospital when two men came up to him from behind, according to authorities.

“Give me the bag,” one of the men said, while flashing a handgun, according to police.

The man then went through the victim’s bag and fled with his accomplice without stealing anything.

Police tweeted out suspect descriptions after the crime:

A thief knocked down a woman and robbed her near the H Street corridor last night, too, according to authorities.

The victim was just south of Florida Avenue NE when a man approached her and grabbed her purse, police said. He then pushed her to the ground and fled with her bag that had an iPhone, wallet and other items.

Police also said a report of a carjacking by a masked man with a gun in Shaw last night was made up.

The false report, which prompted a tweet from police, came from a woman who claimed a masked man took her car at gunpoint near 9th Street and Rhode Island Avenue NW about 8:15 p.m. Monday, according to authorities.