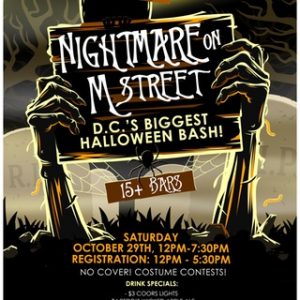 Thousands of revelers in costumes will hit up more than a dozen bars this weekend as part of an annual Halloween bar crawl.

“Dupont Circle is coming alive and transforming from trendy to terrifying,” reads the website for the bar crawl. “Join us for cover-free admission, top drink specials from your favorite brands, costume contests, and most importantly… NO WAITING AROUND IN LINES!”

The bar crawl caused some controversy last year after “drunk and disorderly” partygoers left garbage and vomit strewn across parts of Dupont and downtown. The event was so controversial that it even led to new ABRA regulations regarding bar crawls.

This year, the bar-hopping event will be significantly scaled down, likely due to those new regulations. Organizers are only selling 2,700 wristbands for this year’s bar crawl. Additionally, the total number of bars participating in this year’s event is about half of what it was last year.

Tickets cost between $20 and $30 and give bar crawlers discounts at the following businesses: