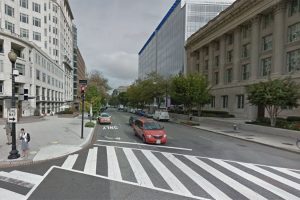 A man trying to stop a downtown brawl ended up with a stab wound instead this past weekend, police said.

The stabbing occurred on the 800 block of Connecticut Avenue NW about 4 a.m. Sunday.

Two groups of people were fighting between Franklin and Lafayette squares when the victim attempted to break up the brawlers. But two people launched an attack on the victim, with one of them stabbing him.

It wasn’t immediately clear if the victim was brought to a hospital.

Two men in a Dupont Circle bar fight were hospitalized this past weekend, too, according to authorities.

The incident happened in Dirty Martini at 1223 Connecticut Ave. NW Sunday about 2:30 a.m.

One of the men used a bottle to hit the other man, who assaulted the bottle attacker’s girlfriend, police said.

Both of the men were brought to local hospitals for treatment. At least one of them was arrested.

This is not the first time a person has received injuries inside the Dirty Martini building.

In 2013, a visitor to Dirty Martini’s upstairs Dirty Bar suffered “a concussion, facial injuries, fractured ribs, a kidney laceration and other injuries.” A man’s fingertip also was bitten off during a fight that occurred there on Jan. 1.

more stories
Previous
Henry’s Soul Cafe to Reopen U Street Eatery on Nov. 15
Next
Pet of the Week: Paddington