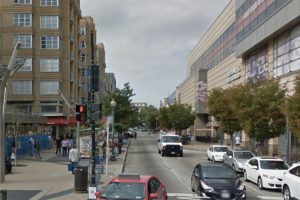 The crime happened on the 1400 block of Irving Street NW about 11 p.m. Monday.

The victim was walking near the DC USA retail development when he passed about 10 people, including the person with the mask, according to authorities. One of the individuals then punched the victim in his face, and the rest of them knocked him to the ground.

The attackers grabbed the victim’s wallet and cellphone soon after and fled.

Besides describing the mask of one of the robbers, police haven’t released any other suspect information.

A group of young masked thieves also beat up and robbed a man in the Foggy Bottom area last night, according to authorities.

The violent group robbery happened on the 2400 block of Pennsylvania Avenue NW about 7:30 p.m. Monday.

The victim was walking just west of Washington Circle NW when four girls and four mask-wearing boys came into contact with him, police said. One of them punched the man soon after, knocking him down. Someone then punched and kicked the victim.

The group of kids eventually took the man’s iPhone and ran away.

Police tweeted out suspect information after the crime:

A group of thieves with a gun robbed a man in a sandwich shop near Union Market early yesterday morning, too, police said.

The victim was ordering a sandwich when a woman entered the store and started arguing with the shop’s cashier to cause a distraction, according to authorities. Two men walked in the eatery soon after.

One of the men, who was wearing a ski mask, then flashed a handgun and pulled out the victim’s keys from his pocket. The trio eventually went into the victim’s car nearby, took his iPhone inside and fled the scene.

A manager of the Subway wasn’t immediately available to comment.