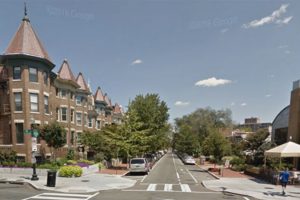 A thief stole a delivery man’s car while another person punched the victim and flashed a gun at him in Dupont Circle earlier this week, police said.

The victim was making a delivery when someone hopped into his Toyota Corolla, which he left running, according to authorities. The delivery man tried to stop the car, but was unsuccessful.

As the thief drove the vehicle away, a young man with a mask and another person appeared. The young man then punched the victim in the back of his head and showed a handgun.

The gun-toting attacker and the other individual fled soon after.

The victim didn’t report any injuries.

Police released descriptions of two of the suspects:

A young thief ran off with a man’s iPhone after an accomplice tripped him in Columbia Heights last night, according to authorities.

The robbery occurred on the 1300 block of Kenyon Street NW about 9 p.m. Tuesday.

The man tried to chase the boy, but another boy tripped victim, knocking him to the ground.