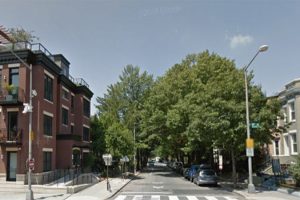 A group of thieves beat up and robbed a man in Adams Morgan early this morning, sending him to the hospital, police said.

The violent robbery happened on the 1700 block of Euclid Street NW about 1 a.m. today.

The victim was walking to a bus stop about a block west of Meridian Hill Park when three men came up to him, according to authorities. The men then hit the victim in his face, knocking him down.

Once the man was on the ground, the beating continued until the men grabbed the victim’s money and some of his other belongings and fled.

The victim eventually was brought to a local hospital for treatment.

A thief also robbed a man at gunpoint in Mount Pleasant last night, according to authorities.

The armed robbery occurred on the 1700 block of Lamont Street NW about 8:45 p.m. Wednesday.

The victim was walking past a man just west of Lamont Park when the person turned around, police said.

“Empty your pockets,” the man told the victim, while flashing a handgun, according to authorities. “I’m not messing with you.”

The victim then handed over some of his money, and the man with the gun fled.

Police described the suspect as a black man who was about 20 years old and wore a dark-colored shirt with white lettering.