The residential neighborhood of Southwest Washington (the smallest quadrant in the District) has an interesting past and is currently undergoing a major revitalization. The neighborhood is bounded by 395 to the north, the Washington Channel to the west, the Anacostia River to the south, and the South Capitol Street to the east.

The Southwest Waterfront was part of Pierre L’Enfant original master plan for DC and includes historical sites such as Fort McNair that was established in 1791. After the civil war, the area became home of poorer residents with a mix of eastern European immigrants and freed slaves. The commercial area was located at the waterfront and became a thriving waterfront with stores and shops – although most of the neighborhood was tenement housing.

The 1950s brought the controversial “urban renewal” which permitted the city to essentially start from scratch with a new master plan – only a few buildings remained after urban renewal. Most notably, the fish market, Wheat Row, Thomas Law House, and the St Dominic’s Catholic Church.

Today, the Southwest Waterfront is comprised of many large condominiums, cooperatives, and apartment buildings — many include both townhouses and apartment buildings. Many of the existing properties are from the modernist period of the 1950s and 1960s. Since the early 2000s, the Southwest Waterfront has begun gentrifying with major renovations at many of the large apartment and condominium communities.

The waterfront itself is undergoing a multi-billion dollar revitalization with the new Wharf Development by PN Hoffman and Madison Marquette. The mixed-use project will include office, residential , hotels, entertainment, and outdoor public spaces.

The learn more about the neighborhood and its history, visit a neighborhood blog: “Southwest… The Little Quadrant That Could.” 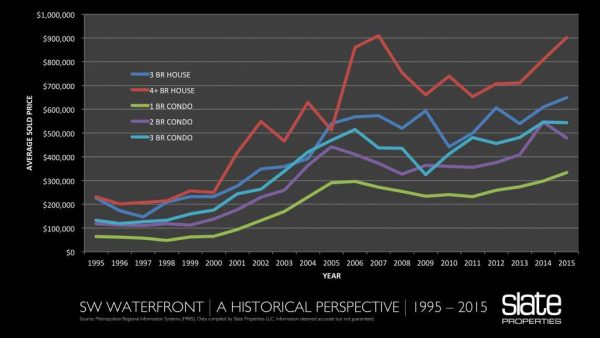