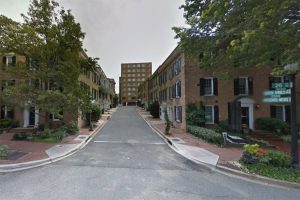 A thief used a gun to beat a man during a robbery in Foggy Bottom last night, police said.

The armed robbery happened on the 900 block of Hughes Mews NW about 8:45 p.m. Thursday.

The victim was going into a home about three blocks west of the Foggy Bottom-GWU Metro station when a man came up to him and flashed a handgun, according to authorities.

The man with the gun forced the victim inside the house soon after and robbed him. The gun-wielding man then used his weapon to repeatedly hit the victim in his head before leaving.

The victim received injuries in the attack. But it wasn’t immediately clear if he went to a hospital.

Police tweeted out a description of the suspect after the crime: