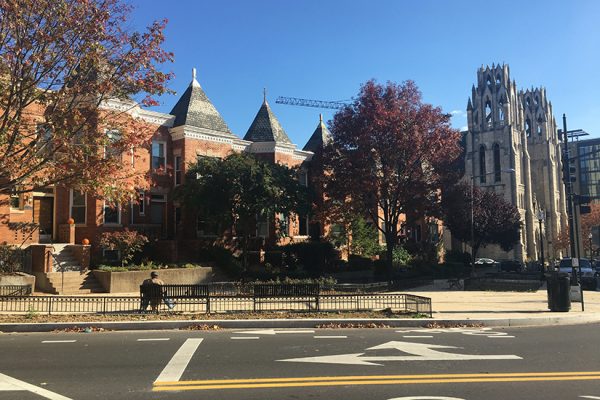 A small group of people who live near Meridian Hill Park have banded together to speak out against a plan to put a bike-sharing hub near their homes.

About seven neighbors showed up to last night’s ANC 1B meeting on U Street to make their voices heard regarding a DDOT plan to install a new Capital Bikeshare station at 15th and W streets NW.

Over the past few weeks, the neighbors have debated with local leaders and DDOT officials over whether a new Bikeshare station should be installed at the southeast corner of the intersection.

Some locals, like Steve Fotiu, say installing the station there would be too noisy and could create safety problems for cyclists traveling through the area.

“This is a very dangerous intersection,” Fotiu warned, “and they’re going to ride right off of a sidewalk into the street to get to the bike lane on 15th.”

The station could also lower home values in the area and help set a precedent for more Bikeshare stations in other residential zones throughout the District, he added.

“If I was to go to DDOT… to put a hot dog stand at this location, DDOT would reject that request on an inappropriateness for this location.”

Fotiu continued: “If we had a referendum of homeowners in the city [asking] if you want a Bikeshare directly in front of your single-family home, I believe majority would say, no thank you.”

Not everyone at the meeting agreed with that assessment, however. Alex Lopez, who lives on the 1300 block of Belmont St. NW, said the neighborhood could use another Bikeshare station.

“There is a serious issue in our neighborhood of bike availability,” Lopez said. “In the morning, there are no bikes, and in the evening there are no stations to park your bike.”

“I did agree with Steve that I personally wouldn’t want a Bikeshare in front of my home,” she said.

But Brown stopped short of saying she’d ask the city agency to reconsider its plans. Though DDOT was willing to look at several other potential locations for the stations, she said, the most “ideal” alternative spot was in front of the nearby St. Augustine Church.

“It’s a tough decision,” Brown said. “But the other alternative was to remove three parking spaces in front of a church… and I really didn’t want to do that.”

more stories
Previous
Man Robbed, Pistol-Whipped in Foggy Bottom
Next
What to Expect Around Town This Weekend (Nov. 5-6)