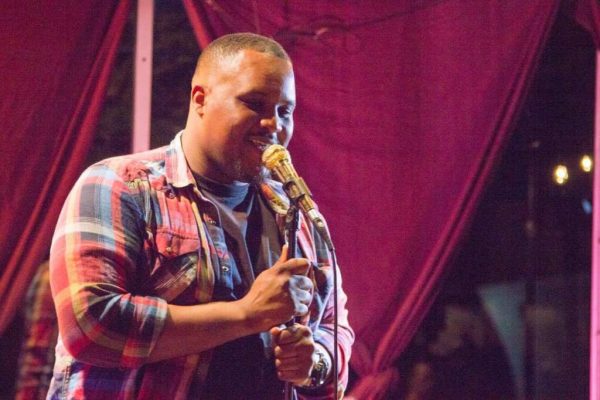 I met Jelani when he tended bar at the now-closed U Street hangout, Stetson’s. He worked with a friend’s boyfriend, so we would occasionally hang out there. At the time, I didn’t know that he ran comedy shows there, probably because I hadn’t really become aware of the scene yet. A little while later, I went back to Stetson’s for a comedy show I had heard about and I saw that Jelani was running it, so that’s when I realized how involved in the D.C. comedy scene he is.

I thought it would be cool to catch up and talk to him about his relationship to comedy and reminisce about the old Stetson’s days.

Borderstan: How would you describe ‘making it’ as a comedian?

Jelani Wills: Once you get a paid gig, that’s when you’re official. Usually more like five years in, but I don’t know. Comedy is changing as technology changes so the standard for making it isn’t the same, like there are many paths to success and everybody doesn’t have to use the same one.

Right now, there are comedians that are getting famous just being internet comedians on Instagram and Facebook.

Yeah, it’s like a new way of becoming successful through different platforms.

Yeah, like print media was really good, but now everything’s on the internet, so things are changing, but I think it’s still important to be able to connect with people. You know the feeling of getting a lot of “ikes on Facebook, it’s cool, right? That’s not the same as a like in person. That’s the thing that us comedians live for, that reaction from the stage. We’re all kind of narcissistic, like that’s why we do this, but there’s different levels of that, where I can see that my social media presence is just as important as a comedian, but I can also make a room full of strangers laugh.

Yeah, how long have you been doing it now? Because when we were hanging out at Stetson’s, when you worked there, were you into comedy then?

Yeah, we had the show upstairs. I was working nights and comedy happens at night, so Mike Farf, a really big comic who is also a really good friend of mine, lived across the street and was like, hey, I like comedy. You like comedy. Let’s do an open mic show here at Stetson’s.

I was a new comedian. I had been doing it for three months when [the show at] Stetson’s started. Usually, you don’t just jump into comedy and start producing shows.

But you wanted to do something with comedy and you were working at night, so it was really your only option.

Yeah, I made the best of my situation and it turned into something really awesome. I guess you can produce shows and you can make comedy, but there’s a difference because you’re wearing multiple hats. I would bartend and host the pop-up shows at Stetson’s, like, I notice your nachos, but I gotta tell this joke real quick. Just trying to multi-task. I would do the pop-up show on a dead night. I didn’t have any customers and thought, well, at least I can have eight comedians show up and buy a PBR, and that’s something. But you can also give your peers and your friends stage time. That’s what we all want. D.C. is the up-and-coming comedy scene, so there are a lot of different places to do comedy and there’s a lot of different people producing shows. The way you get better is doing it as much as you can.

Yeah, so how did you get started doing comedy?

My first time doing comedy was when I was 22. It was more of a similar thing where I was working as the bar back at this hip-hop bar and they did a comedy show.

Yeah, this was on U Street.

What was the bar?

This was Queen Makeda and it was a hip-hop bar. I guess you could say it was more of an urban room.

31, but I would not say that I’ve been doing comedy for nine years because you don’t count them unless you’re doing it consistently. I did it four times and for whatever reason, I was really trying to get into law school and study for the LSAT, so I had put it on the back burner and started working at Stetson’s when I was 25.

I’ve always been the funny kid, the class clown. I was listening to this Dave Chappelle interview and he was saying that he was the youngest of five kids, and the youngest child plays the role of tension breaker. I always felt that way. People would tell me, Jelani, you don’t take anything seriously. I do, but I don’t like tension, so that’s what comedians do, break the ice. It’s uncomfortable, but we’re all going to laugh after all this.

That’s the best part, acknowledging and alleviating because not everybody can do that.

That’s why people will stray away from internet comedians, where it’s just like, you didn’t learn the basics’ But there are different ways to success. At the heart of it, you have to know the basic principles, like you have to know who George Carlin is, who Richard Pryor is; you have to know who the pioneers of this are to respect your craft. You have to be a student. That’s why there are so many more talented comedians now because everybody didn’t grow up with Comedy Central, a whole channel devoted to comedy, and Netflix specials. There are more opportunities to watch more comedy and read about more comedies.

At the end of the day, it’s your personal experience. You have to be yourself, like the worst thing a comedian can do is steal somebody else’s jokes, ’cause that’s not you. You need a personal connection there, so you can reach the reward of making a stranger laugh.

Exactly. I would agree with that. Changing subjects though, do you have any thoughts on the upcoming election?

This election is crazy this year. Like comics, good politicians can connect with their audience. They can either play on people’s ignorance and fear or they can punch up and make a statement. I prefer the latter.

Jelani produces and performs at the Punchlines show at The Pinch in Columbia Heights every Tuesday at 9p.m. He also hosts a show at Funnies at Fireflies in Alexandria, Va., every Monday at 8 p.m.