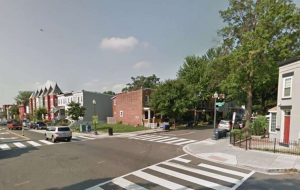 Someone shot a man near the border of Columbia Heights and Park View last night, according to D.C. Police.

Officers responded to a call for a shooting along that block and found a man “suffering from a gunshot wound.”

The man was taken to the hospital, where he is recovering.

Police did not provide a lookout for a suspect. Authorities tweeted about the crime shortly after it occurred:

more stories
Previous
What to Expect Around Town This Weekend (Nov. 5-6)
Next
Borderstan Brief