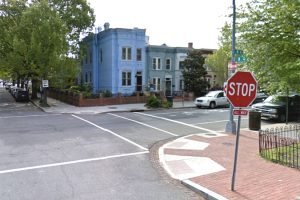 Two thieves stole a cellphone from a woman as she used it to photograph the moon near the H Street corridor last night, a day after a “supermoon” rose over the District, police said.

The robbery happened on the 800 block of 6th Street NE about 10:15 p.m. Tuesday. The moon still appeared larger than normal yesterday evening following Monday’s supermoon, which NASA scientists said was the closest full moon to Earth since 1948.

The victim had her phone in the air to snap a photo at 6th and I streets NE when two boys came up to her, according to authorities. One of them then snatched her phone and her purse.

The boys fled soon after.

The victim was walking near the DC USA retail development when he passed several people, including one person wearing a “poop emoji” mask, police said. One of the individuals then punched the victim in his face, and the rest of them knocked him to the ground as they robbed him.