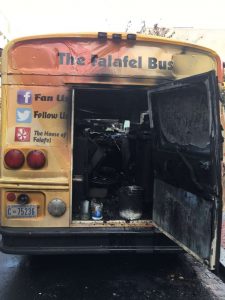 District residents are opening up their wallets to help the owner of a food truck that caught fire in Foggy Bottom yesterday afternoon.

A fire broke out in The House Of Falafel’s Falafel Bus near 21st and H streets NW around 2 p.m. yesterday. Flames and a large plume of smoke were seen shooting from the vehicle.

One man and two women were injured in the blaze, at least one of them critically, according to D.C. Fire and EMS.

Now, George Washington University students and other locals are raising money for the man known as the “falafel guy” throughout the neighborhood.

“We see this food truck every day, and GW students are raising money for this business and those who were injured,” reads a GoFundMe page that was launched yesterday. “The food truck is part of our great community, and I believe it is right for us to help.”

As of noon today, donors had contributed more than $7,350 to the cause. A representative for the food truck was not immediately available to comment on the outpouring of support.