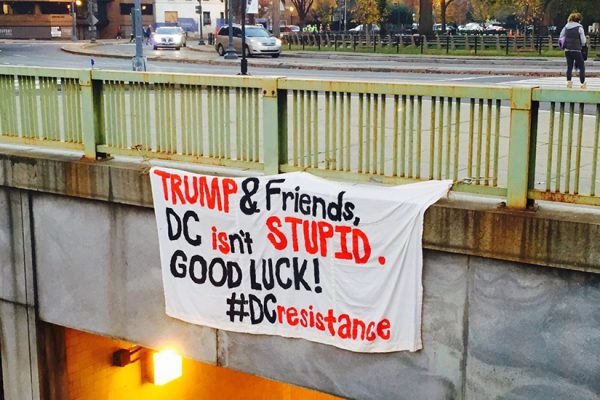 Earlier this morning, a band of dissidents hoisted a banner over the side of an overpass just north of Dupont Circle.

“Trump & Friends, DC isn’t stupid. Good luck!” the banner read. The group that put it there calls itself the “D.C. Resistance.”

Despite the name, it’s not a resistance in the traditional sense. There will be no sabotage or midnight raids, for instance. But there will be lots of public art, said  “J,” a group member who declined to give his full name. Borderstan was able to confirm his group made the banner.

President-elect Trump has frequently promised to “drain the swamp” in D.C., though exactly what that means isn’t totally clear. Since the election, Trump has set off a firestorm of criticism for his appointment of former Breitbart head Steve Bannon as chief strategist and his transition team’s reported consideration of a plan to create a registry for Muslim immigrants.

The D.C. Resistance exists to remind us that none of this is politics as usual.

“They’re coming in to run the government based on an ideology of white nationalism, climate denialism and a whole host of other values that aren’t lined up with the community we’ve created,” J said. “These people are not normal and they shouldn’t feel welcome.”

The group — made up of “dozens” of members — will resist normalizing the Trump administration through displays of “creativity, art, and solidarity,” which may mean more banners or public art in the coming weeks, J said.

“If the resistance had a message for the incoming administration,” J said, “it’s that the swamp is a great place to live and they’re in over their head.”

more stories
Previous
Boy Knocked Down, Robbed in Mount Pleasant
Next
‘Holiday Make-It’ Market for DIY Crafters to Pop Up in NoMa