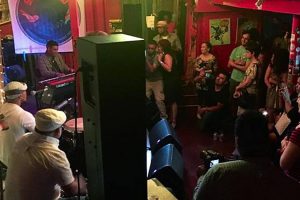 The benefit, organized by the local comedy producers with Laugh Owens Laugh, is scheduled to kick off at the Songbyrd Music House and Record Cafe (2477-2475 18th St. NW) at 8 p.m. Tuesday night.

Local comedians such as Natalie McGill, Paris Sashay and Haywood Turnipseed, Jr. will perform during the event, according to Ahmed Vallejos, one of the show’s organizers. The show will also have musicians Antonia and Sean Barna and storytellers Jessica Murphy Garrett, Dee Ahmed and Nick Baskerville.

The goal of the fundraiser is to “raise a lot of money for a great cause and let people have a space where they have fun without any of the worry of the outside world,” Vallejos told us.

“Philando Castile was murdered and I remember I had a conversation… about wanting to give back to the incredible Black Lives Matter movement and weren’t sure how,” Vallejos said. “We brainstormed and came up with this fundraiser. We just couldn’t sit back and do nothing anymore.”

Attendees can also drop cash into a donation bucket during the event. All proceeds will go toward the activist group.