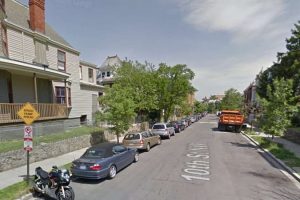 Someone with a knife beat up and robbed a man in Columbia Heights last week.

The violent robbery happened on the 3500 block of 10th St. NW around noon Friday, according to a D.C. Police report.

A man was walking in an alley near the street when someone approached him from behind and punched him in the eye, police said. The assailant then stood over the man and hit him repeatedly in the face and body.

Then, the thief pulled out a knife and went through the man’s pockets. The man grabbed the knife during the robbery, cutting his hand, according to authorities.

The robber ran off with $150 in cash, an iPhone and some marijuana.

Police did not provide a lookout for the suspect.