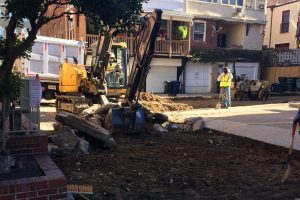 The sound of jackhammers on pavement and shovels hitting dirt will soon be heard in alleys and side streets in all eight of the city’s wards.

Mayor Muriel Bowser and DDOT officials held a press conference in Adams Morgan yesterday to announce the latest round of “AlleyPalooza” repairs.

“We are investing in Washington, D.C.’s alleys at historic levels because they are a key part of our infrastructure and their condition is of vital importance to the health of the District,” Bowser said in a statement. “AlleyPalooza 4.0 builds on a highly successful initiative and demonstrates our commitment to ensuring that Washington, DC’s infrastructure is safe and reliable.”

The mayor’s office has allocated $15.82 million of the city’s budget this year for for alley maintenance and rehabilitation.

A full list of the alleys slated for repairs, including an interactive map that displays each alley’s status, is available online.