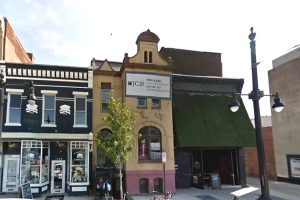 DGS co-owners Nick and David Wiseman are working on a watering hole at 1337 H St. NE, according to ABRA paperwork Borderstan obtained today. But the name of the bar is unclear.

Documents the Wisemans filed under a company called “Bespoke 1337” repeatedly say the spot’s name is to be determined. But one document refers to the place as “Butcher’s Word.”

The ABRA paperwork also doesn’t provide details on the bar’s menu or when it will open. Documents do say, however, that the spot will have room for nearly 200 people, including 65 seated customers. It also will provide chairs for 15 people outside.

Neither Nick nor David could immediately be reached for comment.

The space between Dangerously Delicious Pies and H Street Country Club previously spent time as an illegal funeral home and a “live, work, and studio space,” according to Washington City Paper. The building also was set to become a bar from Eric and Ian Hilton.

more stories
Previous
Thief Asks Man for Cigarettes, Robs Him at Gunpoint in Truxton Circle
Next
‘Krampusnacht’ Parade to March Down H Street This Saturday