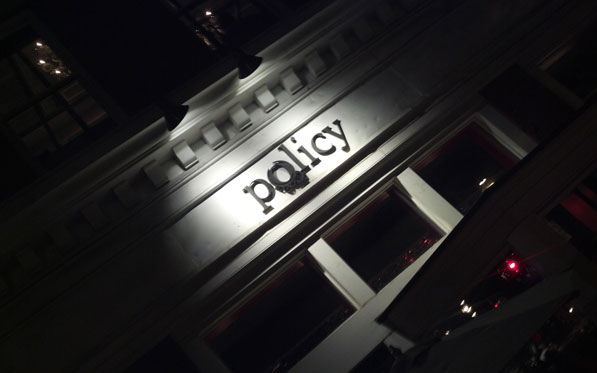 You can dance if you want to at Policy on 14th Street. Just as long as it’s not on a dance floor.

That’s what D.C.’s alcohol board found after investigating whether the bar “created a facility for dancing without Board approval” last December. The Alcoholic Beverage Regulation Administration (ABRA) released its findings in an order this week.

The problem first arose last year, when someone emailed regulators claiming that Policy (1904 14th St. NW) “was permitting dancing” and “did not have a dancing endorsement.”

An investigator visited Policy last December and earlier this year in January to see if the bar was running an unauthorized dance floor. Though the investigator witnessed people moving rhythmically to music, they did not see see any areas specifically marked off for dancing.

From the ABRA order:

While some dancing certainly occurs on the second floor, the Board is persuaded by the record that it is just as likely that the dancing is sporadic and isolated and that Policy merely operates a cocktail lounge with a large standing area on the second floor. Therefore, the Board dismisses the charge brought against Policy.

In short, regulators concluded, having a DJ that prompts people to dance on their own is okay. Having a “a stereotypical dance floor made of wood, vinyl, or other material,” using “elevation, furniture, lighting, or other markings to create a dance floor,” or otherwise encouraging or inviting dancing is not.

Raj Multani, managing partner at Policy, said the business operated that way for seven years without a dancing-related entertainment endorsement.

“We never knew that we were possibly doing anything wrong,” he told Borderstan.

Still, he’s glad the investigation and subsequent hearings are finally over.

“At the end of the day, they made the right decision,” Multani said. “We’re happy they saw it the way that we saw it.”