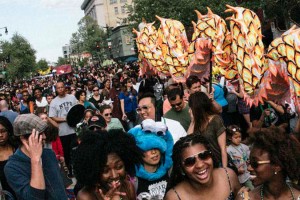 The organizers behind the annual Funk Parade celebration are asking for ideas as they plan out this year’s festivities.

The huge parade will roll down U Street on May 6, organizers announced this week. In previous years, the parade has attracted performers, colorful floats and thousands of people to the neighborhood.

What will this year’s event bring? That’s where you come in. Funk Parade’s organizers are scheduled to host a community input meeting at the Thurgood Marshall Center (1816 12th St. NW) on Tuesday, Dec. 13.

“Share your thoughts and hear others’ ideas for what makes the event great and how to make it better,” a Facebook event post for the meeting reads. “Learn about early plans and schedule for Funk Parade 2017. Get involved with planning, community organizing, fundraising or permitting.”

Those interested in attending the meeting should RSVP online first.

more stories
Previous
Would-Be Thief Attacks Man in Mount Pleasant
Next
What to Expect Around Town This Weekend (Dec. 3-4)