Brookland is sometimes referred to as “Little Rome” for the many religious institutions nearby.

This residential neighborhood is centered along 12th Street NE. Technically, it’s bordered by 9th Street the west, Rhode Island Avenue to the south, and South Dakota Avenue to the east.

The name comes from Colonel Jehiel Brooks, who married Ann Margaret Queen, the daughter of the owner of the 150-acre estate where the neighborhood sits today.

The area remained farmland for much of the 19th century. Then, after the civil war, the population of Washington grew and so did people looking for land out in the country. Homes were eventually marketed as providing a “small town atmosphere”. The introduction and expansion of D.C. streetcar helped shape this middle-class suburb of Washington.

Over the last decade, Brookland has continued to evolve with redevelopment, new housing options, retail and restaurants. Most notably, Monroe Street Market was developed by Abdo Development in 2010. It was finished in 2014 and is a mixed-use development with retail, housing, and restaurants. 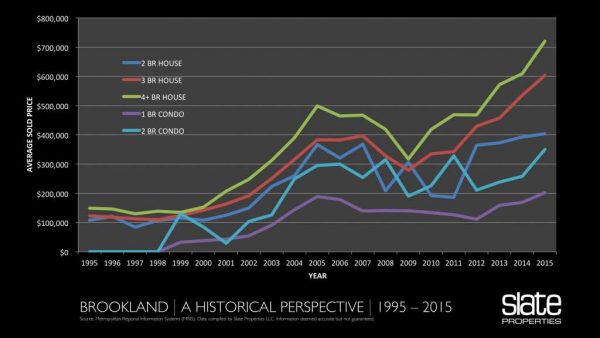