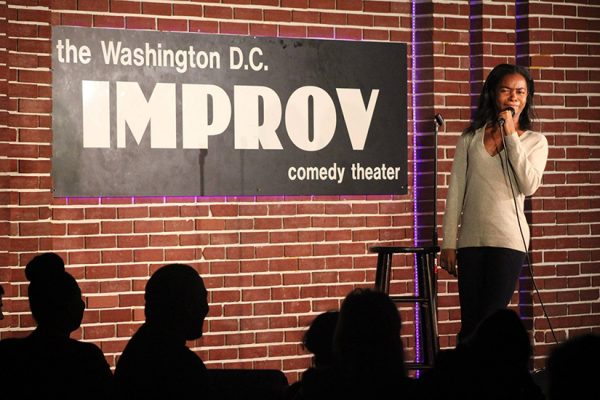 Natalie McGill is someone that I have seen on the D.C. comedy scene for a couple of years, whether hosting an open mic, performing at one, or both. And I always dug her keenly observant comedy. She recently started writing for political comedy news show Redacted Tonight, which tapes near Metro Center. We talked a little about that and about her background in comedy and writing.

Borderstan: How is writing comedy as a job for Redacted Tonight?

Natalie: It’s really fun and it’s also… I don’t know if “scary” is the right word. Maybe I’ll say scary because up until this point, comedy was always a side thing, like I had my full time job and after my job was done, I went out and did mics and shows and it feels weird, but in a good way, to bridge these two worlds because my day job was journalism.

A lot of my job is scouring and combing through articles and digging deep for stories that people aren’t necessarily paying attention to and then trying to make light of it when sometimes, it’s really not funny.

I always wanted to have a job where I could combine journalism with humor and now, I get to do that, so I’m super psyched about that.

Yeah, I can totally relate to fantasizing about reaching the point of being able to do what you’ve always wanted. Is that what it feels like?

Sometimes, it doesn’t feel real, to be honest. Sometimes, I feel like “oh, it shouldn’t be happening now.” One of my goals in life was to write for a TV show and it’s weird to be accomplishing that goal now because I guess I just assumed that if I ever reached that goal, it would be so many more years out, if I ever reached it, and I think that even if I don’t do anything like this again, I can say that I did it at least once, so I can’t complain.

But, there’s no reason that it wouldn’t happen again. You’re building your experience to do whatever else you want to do.

That is the idea. I do hope that it’s something I can use as a building block. And this is a field that I can stay in. If, for whatever reason, that doesn’t happen, I’m still a journalist and I still have this skill set that I can fall back on.

So, while it’s really cool that I’m getting the chance to do this, I always can realize that “hey, not everybody gets to stay in this business forever and if it doesn’t work out, you have something to fall back on.”

Exactly. So, what is Redacted Tonight? I don’t know much about it.

It’s a news satire show that focuses mostly on politics. Lee Camp is the host and I’m one of the on air correspondents, along with Naomi Karavani, John F. O’Donnell and Carlos Delgado before he moved.

It’s a combination of remote pieces where you’re digging deeper into a story. There’s also conversations with me at the desk about something that’s going on in the news.

Yeah, in Metro Center with a live audience. I think it’s a really cool thing that it tapes here in DC and that people can see it and watch this type of comedy in their backyard, essentially.

We usually tape on Thursdays and it airs on Fridays. They have a pretty big YouTube following, so they’ll air the full episode, but they’ll also parse out the clips or segments from the show, too – if you want to watch a clip on a specific topic.

Ok and where does it air?

I don’t know if you were trying to plug that, but it’s part of what you’re up to, right?

Yeah, that’s the newest thing in my life.

How long have you been doing comedy?

A little over 5 years now. My first time doing it was Halloween of 2011.

At the Looking Glass Lounge [in Petworth]. There was an open mic there – it would’ve had to have been the last Monday of the month. I was freaking out because I didn’t know if they were going to cancel the show because it was Halloween, because you know how sometimes bars – whatever they have planned normally, they just shut it down so they can just have a bunch of drunk people in their costumes come in. I thought that was going to happen the first night I wanted to do it.

Then the host assured me, who was Reggie Melborough, that “no, we’re having the show. It’s fine.” I dragged my roommate there. She did standup before I did, actually. We knew about that mic and that was the only one I knew about to test my first five minutes. That was the one that I was most comfortable with that she would probably be okay going to.

Had you gone as an audience member before?

Yeah, for her stuff and for Elahe Izadi because we used to work together at The Gazette Newspaper. And she was doing it way back then. Sometimes, she would invite friends and coworkers, which included me, to the shows. So, I’d been an audience member for a little while before I started.

Did going to the shows get you pumped to do it?

It took some time for me to warm up to it. When my roommate started doing it, there was no pull for me. One of the mics she did was at Club Japone in Dupont. There was barely anybody in there and it wasn’t very well lit at all. So, did it look attractive then? No.

I think what warmed me up to it was taking time to write things on my own and seeing professional comics that I really, really liked. Because I consumed a lot of comedy and I never thought about doing it until I started honing more what I wanted to say and it finally all came to a boiling point in 2011. I waited until almost the end of the year to do it because I was still scared.

You can catch Natalie’s stand-up at open mics held weekly at The Big Hunt and Bier Baron Tavern in Dupont Circle and Town Tavern in Adams Morgan. Also, check her website follow her on Twitter @NatalieSMcGill for show updates.