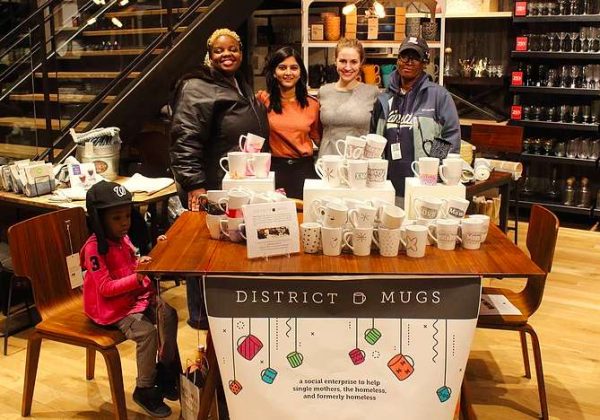 A new organization is helping District residents in need find a new hobby and make money at the same time.

That organization, District Mugs, started in August with help from nonprofit Streetsense. The idea, according to duo Shreya Bhargava and Lise Courtney d’Amico, is simple: Give people who are homeless or who have experienced homelessness the knowledge to build a sustainable small business.

“There really are no economic opportunities for the homeless,” d’Amico said. “We wanted to create a program where they could build something for themselves.”

Once a week, participants meet at the Streetsense headquarters downtown to paint coffee mugs.

“Our participants make as many mugs as they can during the class,” d’Amico said. “They actually sign the bottom of the mugs so we know who created each one.”

Then, at a later date, the artists, Bhargava and d’Amico set up a booth at a local business and dole out mugs for donations. A drinking vessel can be yours for a suggested price of $10 or more.

“When we get a donation, we keep away a small fraction of that toward our supplies, ” Bhargava explained. “The rest of it goes toward the artist whose mug was sold.”

Last weekend, District Mugs set up a booth at Mellow Mushroom in Adams Morgan and distributed nearly 30 mugs. To date, the group has sold about 280 mugs and raised nearly $2,000.

The process has been “incredibly rewarding” so far, d’Amico said.

District Mugs also sets up shop at West Elm (1728 14th St. NW) or at the Pottery Barn in Clarendon. Locals who want to see where the organization will pop up next can follow the group on Facebook.